Sale is a sealed-bid auction, in which each potential buyer is blind to what others offer, but is expected to get $300,000 or more 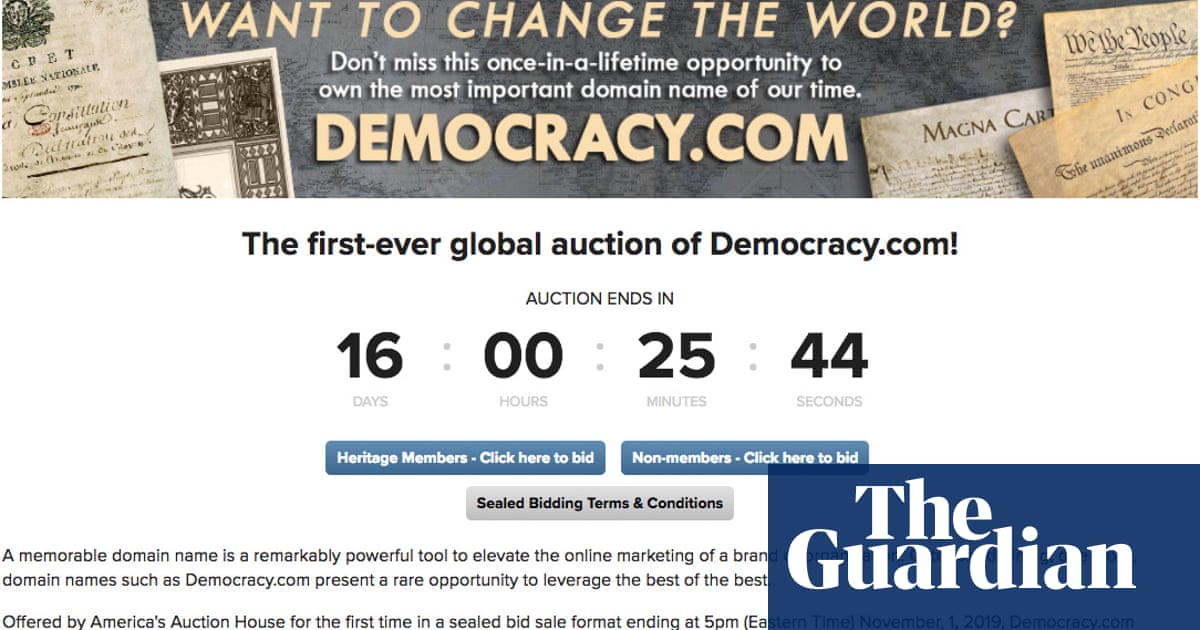 What is democracy worth? Later this month a broadly philosophical question will be put to a material test.

On 25 October at 5pm, the web domain democracy.com goes up for auction. The site is currently administered by veteran social activist Talmage Cooley. The advertised price, according to Heritage Auctions, is $300,000 or higher.

The sale is being run as a sealed-bid auction, in which each potential buyer is blind to what others have offered. Its a gamble, like democracy itself, and its possible that there will be no buyers at all.

This is an aspirational piece of real estate that represents one of the core values on the planet, and its worth what somebody thinks they can do to leverage that name, Cooley told the Guardian.

Domain names are not what they used to be and values have fallen since domain suffixes were expanded beyond dot com and dot org. The highest recorded price for a domain was cars.com, valued at $872m in 2015.

But .com domains attached to prestige words are still going for big sums.

On 24 October, Fashion.com goes up for sale in a sealed bid auction. The sellers offer no guidelines to the asking price.

Cooley, who holds a masters in civic engagement and technology from the Harvards Kennedy School, is stakeholder but not the owner of the site, whom he declined to name. He established it in 2013 as an altruistic, for-profit business to democratize access to political communication and counter the role of money in politics.

The idea was to make it easy for anyone who wants to run for office to start a political or civic group, for a citizen to find the positions and voting record of candidate, Cooley told The Guardian.

Set up before the Trump election and before anyone had heard of Cambridge Analytica, the site was a safe space for political discourse.

When we set up democracy.com it was pre-Trump, pre-Nationalism and neo-Fascism. Charlottesville hadnt happened, Cooley recalls. Nobody in 2016 was talking about Facebook ad-buys or little videos. And it worked. People ran campaigns it didnt have any tinge of negativity.

We designed it for pure citizen engagement, a well moderated town hall for civic action and trying to leverage ideas where trust and good-faith ruled not a place for food fights, Cooley says. All that kicked off when Trump won.

But it was money that undid democracy.com, or rather the lack of it.

Democracy.com ran into problems after merchandising and credit-card fees failed to produce enough revenue. A shift to a subscription model proved to be too expensive. For five years the site was funded by angel investors. In February funding dried up, and the site shuttered two months later.

Cooley said he was broken-hearted when the decision came to put the business up for sale. He estimates it would cost $2m to recode the site into a subscription-based model a change, he says, the sites users indicate theyd accept.

Over the past months hes been doing the calculations. There are 2,500 billionaires on the planet, 20,000 people worth $400m or more. We just need to find one that is passionate enough about democracy to say, Hey, I bought a $10m house in the South of France, for $10m I could certainly buy democracy.com.

I think the buyer is a high net worth individual or organization in a country where issues of democracy are important and active, Cooley said, noting that the site registered traffic form India when news of the auction was first publicized. Maybe somebody who wants to do good and have some status to go along with it.

Cooley has tried reaching out to the obvious candidates Linkedin billionaire Reed Hoffman, New Yorks former mayor Mike Bloomberg, Republican senator Mitt Romney and Tom Steyer, the billionaire and would-be Democratic presidential candidate. But he concedes its hard to get close to the decision-makers. As a veteran activist he says hes learned something else: These rich guys are only interested in doing something they can put their name on.