U.S. stocks and Treasuries fell in tandem Thursday ahead of a slew of technology earnings, as the threat of higher rates from the Federal Reserve continued to rattle equity markets coming off their best month since March 2016.

The Nasdaq 100 Index bore the brunt of the selling as the tech-heavy gauge headed for its worst week since June. Amazon.com Inc. tumbled before its earnings, with Apple Inc. and Alphabet Inc. also fell on results that disappointed.

Other major averages notched modest retreats in an up-dand-down session that actually saw the CBOE Volatility Index decline. The Dow Jones Industrial Average gave up all of a 150-point advance only to eke out a gain in the final minutes of trading. Rate-sensitive real estate and utility shares led the S&P 500 Index to a third drop in four days.

While earnings drove individual stock moves, a resumption in the bond selloff weighed heaviest. The 10-year yield spiked to just under 2.79 percent, the highest level since April 2014, renewing speculation that pain in the bond market would spill over into equities. The dollar also fell, losing 0.5 percent against major peers.

“The performance of the bond market has got to be beginning to flash red to equities,” Mark Heppenstall, chief investment officer of Penn Mutual Asset Management, said by phone. “Just the strength of rally in the equity market is going to bring the Fed more and more into play this year. It seems we’re reaching a critical level on interest rates that could throw some cold water on the party in the equity market.”

Treasury weakness spread to European sovereign debt amid solid manufacturing data from the region, while earnings sent . The pound increased a third day alongside the euro, though U.K. numbers disappointed. Oil retook $65 a barrel and gold pushed higher. The dollar slumped. 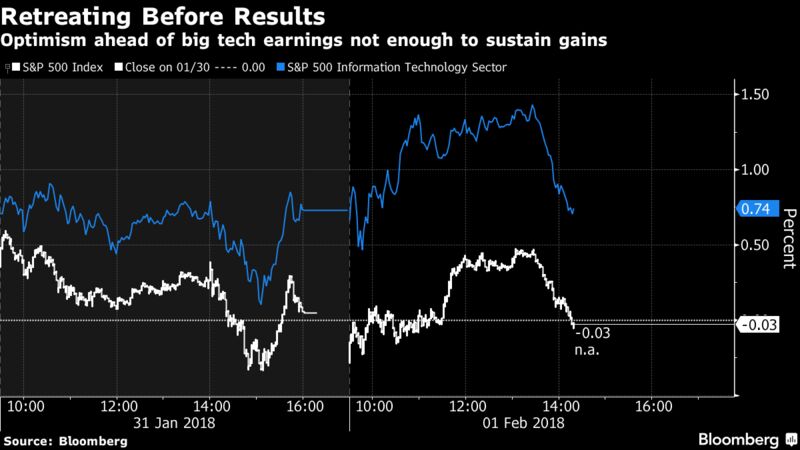 Investors are weighing the path of monetary policy at a time of synchronized global growth and rising corporate profits that’s pushed equity gauges to unprecedented levels and sent benchmark bond yields to the highest in almost four years. The Fed on Wednesday acknowledged stronger growth, expressed more confidence that inflation will rise to its 2 percent target, and set the stage for a March interest-rate increase.

“The equity market has been selling off the last couple days in terms of understanding that rates are going to go higher and higher," Wade Balliet, chief investment strategist at Bank of the West, said by phone. "Given some of the massive gains we’ve had in the last nine years, as rates trickle higher, that puts a little bit of nervousness in the equity market that we may not have as good a year as we had in 2017."

Here are some important things to watch out for this week:

And these are the main moves in markets:

After Square issued weak guidance in Q4, all eyes were on the payments company to see...

CHX tried unsuccessfully to sell itself to China-based group Deal would follow NYSE’s purchase of...

How high can bitcoin go? Since the digital currency cleared $7,000 earlier this month, an...

Around the world, a handful of visionaries are plotting an alternative online future. Is it...