Asian equity markets recovered some of the losses sustained in the global rout after U.S. shares rallied amid a welter of calls to “buy the dip.” Treasuries steadied after a rebound in yields Tuesday.

Japan’s Topix index was poised for its biggest jump since November 2016, while stocks also rose in Hong Kong and China. Volatility on the Nikkei 225 Stock Average fell almost 20 percent after soaring for the previous two days. A topsy-turvy session for the S&P 500 Index ended with technology, materials and consumer shares leading a 1.7 percent advance. The Cboe Volatility Index went through wild gyrations one day after more than doubling, though ended the session down almost 20 percent. 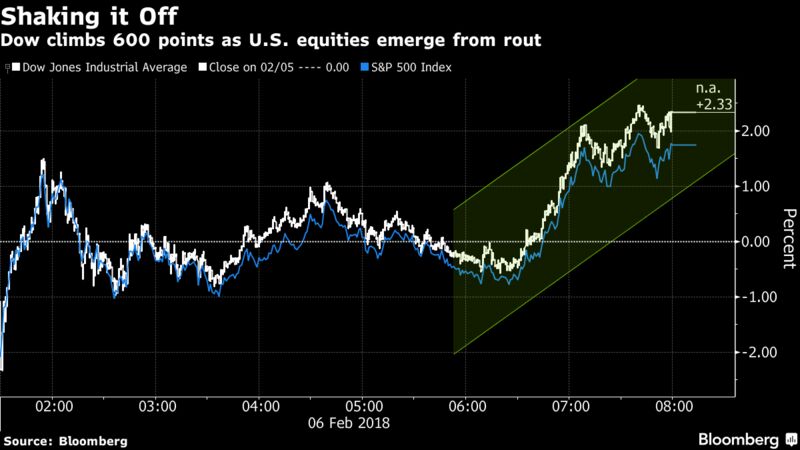 “The pullback may be considered a healthy correction,” said Candice Bangsund, a fund manager in Montreal at Fiera Capital Corp., which oversees more than $128 billion. “The favorable conditions that have underpinned the stock market rally over the last year remain largely intact at this time — the global expansion continues and corporate earnings remain in acceleration mode.”
The sharp sell-off in stocks around the world that started last week and accelerated this week can be explained by a multitude of factors from concerns over the path of U.S. monetary policy to a rapid unwinding of trades predicated on continued low volatility in markets. Traders are now watching whether this rally can be sustained after the slump left markets from Europe to Japan in technically oversold territory.

Meantime, oil rose after three days of declines as an industry report was said to show an unexpected decline in U.S. crude stockpiles. Metals advanced. Bitcoin traded around $7,700 after at one point sinking below $6,000 for the first time since October.

Here are some key events scheduled for this week:

The U.K. government, like a number of other countries around the world such as the...

Did you know that the cuckoo clock originated in Germany? It’s a fact. And while...

If you’re the founder of an early-stage startup here’s a big, fat reminder about one...

Cryptocurrency venture facing pushback from legislators, and Facebook CEO says company is not the ideal...

San Francisco (CNN Business)You’ve almost certainly heard the term blockchain. But you probably have no...